I am encouraged by what Thrive Causemetics is doing so I was excited to see them unveil their Liquid Lash Extensions Mascara. I knew I had to try it out and give you the scoop!

People seem to be as divided about mascara as they are about politics. There have been mascaras that I have absolutely hated that others profess their undying love to. It’s really a matter of your end goal and what you’re starting with. For example, I have a decent amount of lashes, so I don’t look for volume but length and separation. I am super adamant about separation, almost more than anything.

Read on to find out if the Thrive Causemetics Liquid Lash Extensions Mascara gave me all of that and more.

The first thing I noticed about the Liquid Lash Extensions Mascara was the hefty tube. It has a very substantial feeling in your hands, almost as though it’s made of metal? I like how it feels. It has a little more product in it than some mascaras so perhaps that is why.

The brush is plastic and looked as though it would lend itself well to the feathery, separated lashes I’m after. Just a note: this brush style tends to work best on those with a decent amount of lashes but if you have short stubby lashes, sometimes they can dump too much product on them.

Now, let’s take a closer look at the ingredient list. There are a few key things in the Liquid Lash Extensions Mascara that encourage lash health and growth like castor oil, panthenol and sodium hyaluronate. It also contains shea butter and an orchid stem cell complex meant to stimulate lash growth too. I was surprised to see it contained caranuba wax as it behaves like a tubing mascara in my opinion.

Tubing mascaras forego traditional waxes in place of a polymer. The Liquid Lash Extensions Mascara does contain a polymer as well so this appears to be a bit of a hybrid formula. Though Thrive Causemetics describes Liquid Lash Extensions as a fiber mascara, I cannot detect any visible in the formula. I would classify it as a tubing mascara, even if they do not, as it wears and removes like one. More on that to come.

Here is my eye one coat of the Liquid Lash Extensions applied. As you can see, it’s a nice, rich black, adds length and volume but with one problem. The separation ain’t happenin’. Several lashes are clumped together and that really bothered me.

If you don’t have a ton of lashes to begin with, perhaps the lack of separation won’t bother you as much. It was the main reason I don’t love this mascara though.

As far as wear time goes, I was very impressed. I didn’t experience any flaking or smudging and it even withstood some tears without a single streak. True to tubing mascara formulas, it slides off in pieces with just water. I honestly think that is my favorite thing about it. It’s so fun to stand in the shower and pull off clumps of mascara.

If this mascara had better separation, I would like it a lot. I suspect that the short-bristled plastic brush is depositing too much product onto the lashes and the bristles aren’t long enough to effectively comb it through.

DO I RECOMMEND THRIVE CAUSEMETICS MASCARA?

No. I wanted to love this mascara but due to the overly-thick lashes it creates, I can’t say I do. I do like it and I will wear it on days that I don’t mind fatty lashes, but it won’t be a go-to fave necessarily.

If you have oily eyelids, watery eyes or just find that mascara runs and smudges on you easily, tubing mascaras like this one may be your friend.

Though it does contain some wax, it contains more polymers which form around each individual lash and unlike waxes and oils, don’t melt down. If you don’t mind a little clump n’ dump, the Thrive Causemetics Liquid Lash Extensions might be worth trying!

Click here to see some of the mascaras that are tried-and-true for me. 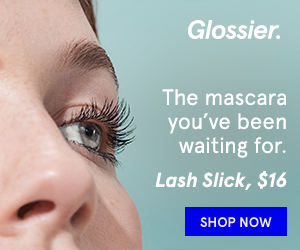